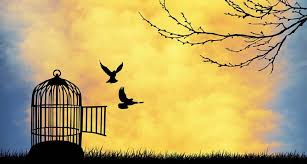 I was watching TBN yesterday and the show It’s Supernatural with Sid Roth came on. (plug: watch it if you haven’t seen it, there are awesome testimonies) I make it a habit to watch this show every week for a new episode, and the reason being is that it really activates my Faith in Christ. There’s a reason it is called It’s Supernatural, some of the craziest things that could ever happen actually come to pass. Anyway, this particular episode had a woman on it who spoke about her experience of God taking her to hell and how real it was, and how frightening and awful it was. She even got teary-eyed reliving it through the testimony.

The woman started to describe how hot it was, the scorching temperature made her skin melt and she became distorted. She said, you know God made us in his image but once you are in hell that changes. She then started talking about the screams that never ceased, her body hurt and she could feel the pain although she was not experiencing any physical torment at the time. Let me tell you that as I was watching I’m sure my mouth was gaping and my eyes were as big as an orange. God brought her back to reality minutes later but he revealed to her that she was holding onto unforgiveness and that the believers of Christ she saw in hell were also. Quite honestly it scared the hell right out of me…I mean literally.

As soon as the show finished, I felt my spirit stirring and God was prompting me to go to a quiet place and get right with him. I most definitely have some harsh feelings towards people who have treated me unjustly and cruel but I was not entitled to hold onto the offense. Straight up, God checked me. I thank God for doing it though because I don’t want to end up in hell. Some people may read this and think that is not the God we serve, but I am not going to gamble with this. “For if you forgive others for their transgressions, your heavenly Father will also forgive you. But if you do not forgive others, then your Father will not forgive your transgressions.” (Matt. 6:14-15) So I started talking to God and asked him for forgiveness, and asked that he help me with my damaged flesh and spirit. The Lord knows every believer’s heart and he will give them the opportunity to repent from behaviors, feelings, thoughts, and even when we turn our back on him, he is merciful and forgiving.

The Bible says,
“Therefore, to one who knows the right thing to do and does not do it, to him it is sin.” (James 4:17) It is clear, if you know what the Bible says and deliberately disobey his Word there will be consequences. My dear friends don’t let the little offenses, the big offenses, and our fleshly desires hold us from our heavenly destination. Get right before the Lord, talk to him truthfully, confess your sins and be washed by the Blood of the Lamb that cancels and cleanses us from all unrighteousness. In Jesus’ name I pray. Amen.